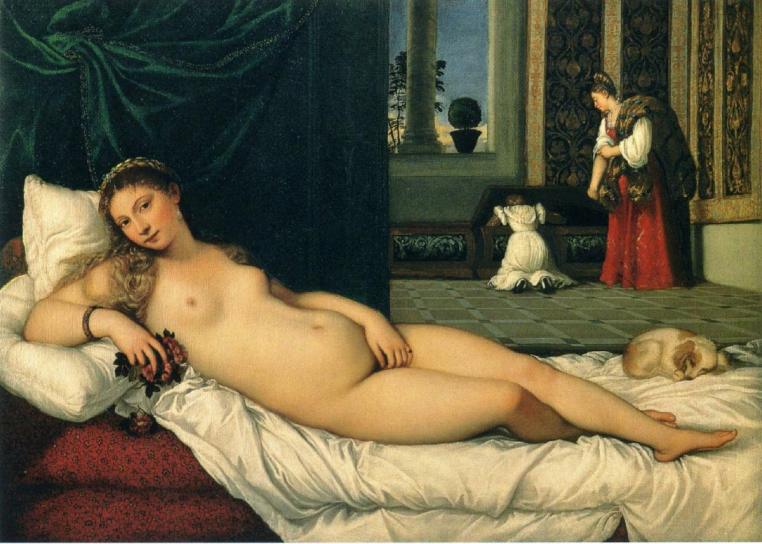 Why do we find some pictures more appealing to us than others? To me this is not purely a question of personal taste; there is something objective about it. For example, no-one could argue that pattern is not innately appealing. We just like it. So when we find the principles of pattern embedded within a painting – things like repetition, rhyming, shape clarity, etc – we can’t help but be more drawn to it than to a picture that doesn’t have them.  In representational painting the unparalleled master of this is Titian. At first glance at the Venus of Urbino (I could have used almost any picture by Titian) we don’t consciously recognise these patterny things. They’re not in your face, but they are there, and they register with us nonetheless. In analyzing paintings I always look for the biggest contrasts between light and dark, because these contrasts are the things that strike our brain first, before colour or texture or anything else. Notice how clear and unfussy every one of these outlines, these shapes, are. Titian always makes any area of light against dark (or vice versa) into a clear, unfussy shape, and he’s always thinking about how these shapes rhyme with each other, and how they flow towards and into each other.
In front of any amazing artwork I ask myself “Why did the artist paint that bit that way? Why did he/she make that decision?” It seems pretty obvious why Titian chose the design he did on those tapestries hanging in the background. The tapestries form dark and light vertical bands that repeat the adjoining dark and light verticals of wall, sky, pillar and curtain – creating a pleasing, continuous pattern. A lesser artist might have painted intricate pictures on those tapestries, thinking he was making his painting more interesting. In fact he would be lessening its decorative force.
Little details in a Titian are often giveaways to how clearly he thought through his compositions. Little details often don’t appear to have much reason to be in a picture, so that makes me wonder why he chose to put them there. So why is that standing lady holding her arms like that? Look at the outer edge of the dark of the tapestry behind her. As it touches her neck it flows down the line of her dark robe, which in turn becomes the line along the bottom of her lowered arm, pointing towards the nude woman’s knees. This is just where the shadowed area of her bottom knee begins to curl under her body. We keep following this clear unbroken line along the bottom of her body all the way up to her hand holding the flowers. There are so many details like this – the line of the top pillow flowing perfectly into her hairline; the line of her pubic area rhyming with both the bottom of the lowest pillow and the shadowed diagonal of the knee. Relationships like these are everywhere throughout the picture. I could go on and on. It is virtually endless.
But what makes all this truly amazing is that he puts it at the service of the painting’s emotional point. There is no doubt that the purpose of this picture was to arouse the man who commissioned it. Tastes in beauty change, so this particular lady may not be our cup of tea, but man, Titian really does his best to make it erotic. A lesser artist with this brief might have painted a piece of pornography. Titian, like a painterly Flaubert, arouses by suggestion. Look at the lady’s fingers over her pubic area. This could be taken as the lady covering her modesty. But the fingers of her other hand, in the same position, disappear within the bouquet of flowers, nestling inside the bush. The pun is unintended, but appropriate. If the viewer empathises with the actions of the woman, pretends, that is, to be the woman and feel how those ten fingers would feel, you start to get the point. (And while we’re on the subject of that hand, one tiny detail – look at how the light bands of her index and second fingers flow unbrokenly into the lights of the flowers, extending into a longer, flowing curve).
But just in case you were in any doubt that  the pubic area is the real focus of the picture, look at where the big, black line of the curtain ends up. Horizontally, her ‘sexuality’ is the exact middle of the picture. It’s also in the middle of a straight horizontal line between the hand in the bush and the soft, warm, fluffy puppy at the end of the bed. The canniest detail is the sheet beneath her. If you squint, the tucked-in sheet forms a dark triangle on the left, rhyming, as an almost perfect copy, with the pubic area. Imaginatively, the act of tucking in the sheet, the two mattresses squeezing around your fingers as you push it in……. blimey. It’s hotter than I thought today. I’ll just open a window.
Squint again and turn the picture on its side, with her head at the bottom. The mass of her body, with diagonal lines of shadow coming in from one side, then the other, then the other, give the impression of twining, like cords of a rope coiling around each other, tapering to a point at her toes. Coiling, entwining – you get the picture; or rather, subliminally, the feeling.

I have a new book coming out – “Peter Duggan’s Artoons”! It’s available from the 29th of October, published by Virgin Books. A French version will be published by Flammarion in Spring 2016, with hopefully more languages to follow. You can pre-order here:

2 thoughts on “WHY TITIAN IS SO DAMN GOOD”