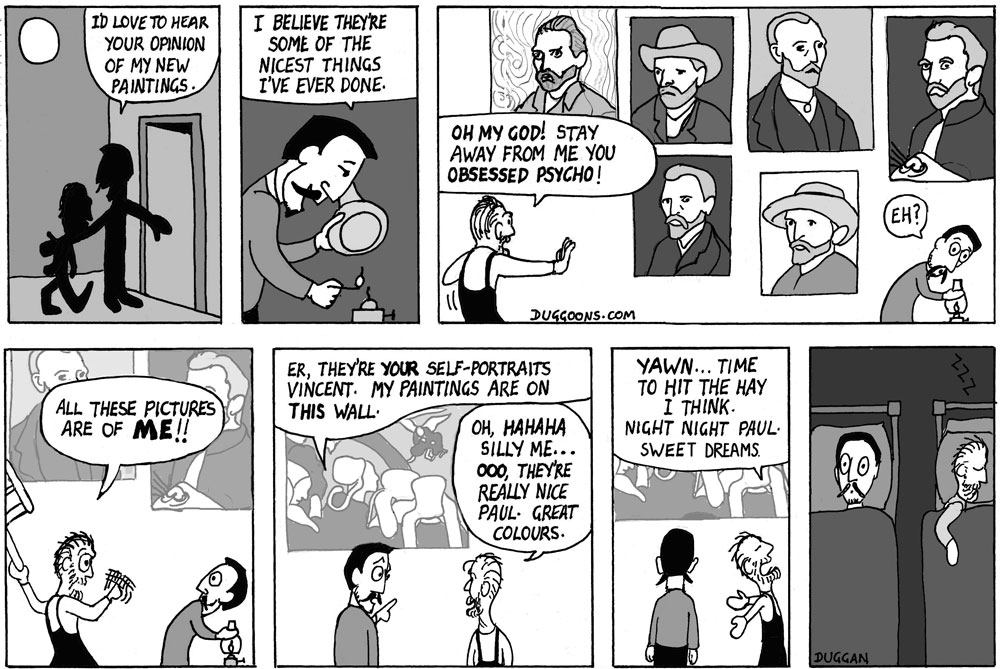 I had an idea about doing something along the lines of that movie trope where someone (for the sake of convenience, let’s call him/her Keitherine) walks into the room of a friend/acquaintance/stranger to find it covered floor to ceiling with photos, all of Keitherine. Keitherine immediately realises, to his/her great dismay, that his/her friend/acquaintance/stranger is a crazed stalker.

The artists in the cartoon are, of course, Vincent Van Gogh and Paul Gauguin, who in 1888 shared a house for a nine weeks. Their famous experiment in communal artistic living, just the two of them in The Yellow House in the small, southern French town of Arles, did not end well. They were two extremely strong-willed, mega-talented, passionate men (their discussions, said Vincent, were “terribly electric”) so it was perhaps inevitable that they would get on each others’ nerves. The “excessive tension” (Vincent’s words) of their relationship ultimately led to Van Gogh slicing his ear off and giving it to a prostitute. The next day Van Gogh was found in his bed by the police, unconscious from blood loss. Despite Van Gogh repeatedly asking to see him, Gauguin stayed away from the hospital where he was being treated and left town a few days later. They never saw each other again.
Perhaps the hopes and dreams of these artists’ joint enterprise are only now being realised, their ambitions finally fulfilled – with this cartoon. Van Gogh’s many self-portraits, along with his occasional bouts of madness, allowed an inversion the movie trope; the Keitherine character is now the crazy one. We can now see that as hard as it was for them both at the time, in the end it was worth it.
The intensity of their relationship, within the confines of a small house – it almost sounds like a reality TV show, but without the cameras. A reality TV show without cameras? I will despair for humanity if things ever sink that low.
Written by
Peter Duggan
Posted in
Uncategorized
Tagged
Andy Warhol, Arthur Sarnoff, Jasper Johns, Robert Indiana, Vincent Van Gogh
Comments
Leave a comment