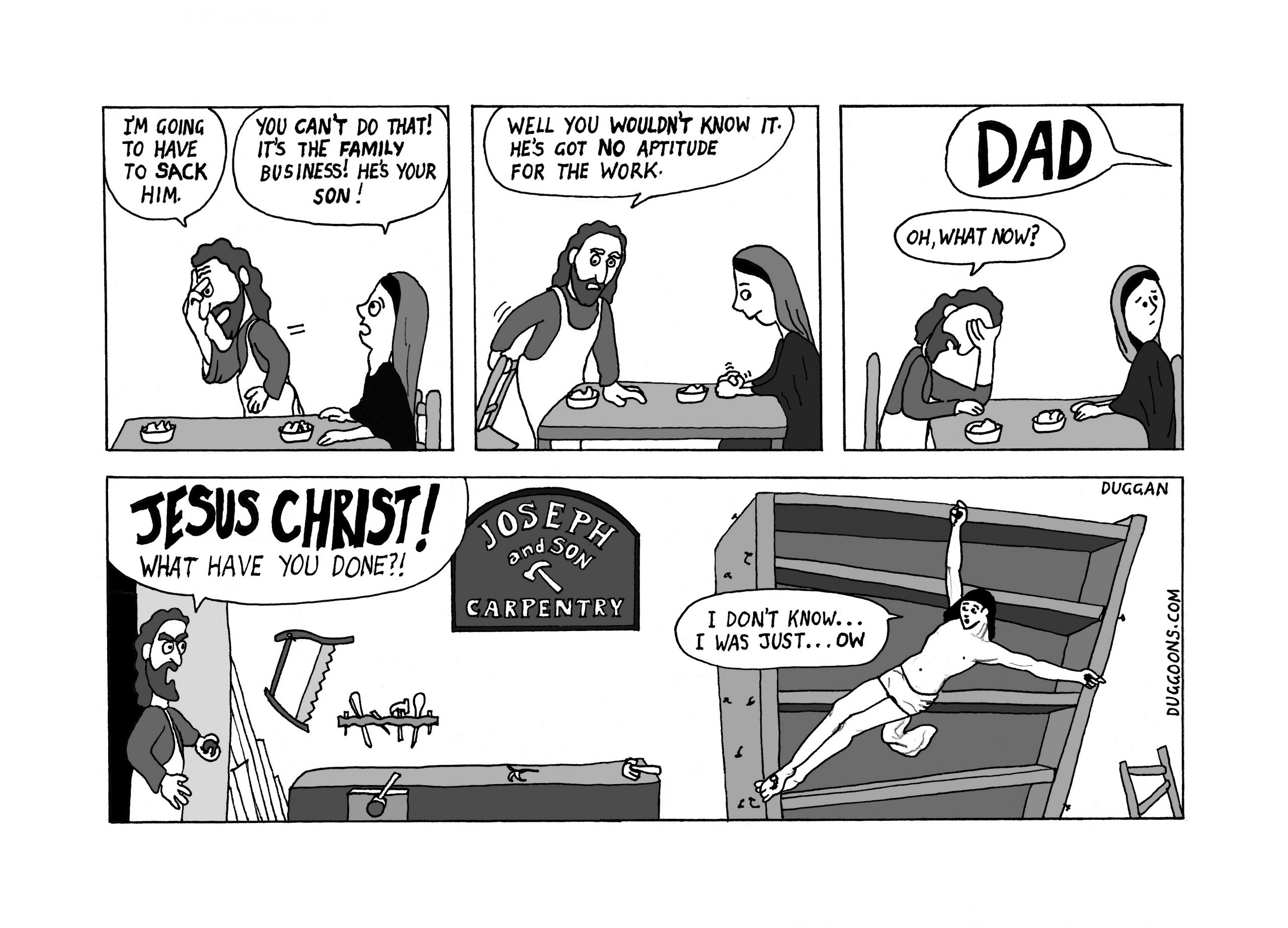 This cartoon was meant to be published in the Guardian yesterday but was pulled at the last minute. Were they right? Did I go too far? Maybe they saved my bacon. Not sure whether to be angry or not. Considering that half of Western art is about religion it feels silly avoiding it.
I’d be interested to hear what you lot think because I honestly don’t know.

POSTSCRIPT (a couple of months later)
I concede there is a problem with this cartoon. I thought up this non-art joke and felt I could easily slot in the appropriate art reference (it occasionally happens this way). As the history of Western art is a smorgasbord of crucifixion scenes I figured I’d easily find the appropriate image. Nope. I needed a slightly klutzy and preferably adolescent-looking Jesus but most figures nailed to the cross in Renaissance and Baroque art are very fit-looking, sage-like figures. Either that or it’s all a bit gruesome. I realised my best bet was to look to Northern European, early Renaissance art, which was far less prone to the heroic idealisation of Italian art. Rogier van der Weyden’s  Crucifixion Diptych fit the bill but unfortunately it is not a familiar depiction of the crucifixion (i.e. famous). The joke would have worked far better if it was some immediately recognisable, iconic painting. In not being famous the discrepancy between my klutzy cartooning style and the more realistic crucified figure perhaps emphasises the sadistic, tragic dimension of being crucified – obviously not my intention. Annoyingly, the perfect crucifixion scene was lurking out there but just didn’t occur to me in time – Paul Gauguin’s Yellow Christ. It is much more well-known than the Van Der Weyden, is non-heroic and, ridiculously perfectly for me, is quite cartoonish.
As my brief is to draw cartoons on Art I can see that the cartoon, with an unrecognisable art reference, could be construed as going off-piste. But whether people got the specific reference or not, I felt that the ubiquity of paintings and sculptures on the Crucifixion made it an obvious generic reference to art history.
(On a side note I was surprised to realise that there are very few really famous crucifixion scenes. This one is probably the most famous – imagine if I had used that!)
Obviously I was aware I was treading on thin ice to attempt a cartoon on this subject. Using imagery and subject matter that some people hold in reverence in a non-reverential way will antagonise. However I felt I had carefully avoided causing any true offence. The use of “JESUS CHRIST” as an expletive is, quite feasibly, offensive to some people. In the cartoon we read it as an expletive, but then realise that Joseph is simply shouting out his son’s name. This mistake causes the reader to collapse and possibly faint with laughter.
When I try to identify the precise nature of the offence caused by using the crucifixion I have to say I am irked by the answer. If anyone can honestly construe my cartoon to be an attack on Christianity then my motto must be “Jugulars are for jerks. Go for a capillary!” Quite clearly my intention is humorous and silly. I will preface everything I say from here on by emphasising that this is a question of scale. I find Madonna’s use of it as crass as anyone else. But the manner in which I use it – small-scale, for obviously humorous, non-attacking reasons, yet still censored – then this forbidden quality sets off alarm bells with me. I can’t find a good enough reason why people should be insulted other than the fact that some people say it is untouchable. If I had genuinely caused offence then I would feel fine about the cartoon being pulled. But after a closer look the reasons seem pretty lame.
My position (on life I guess)…
Clive James has a good line on the strength of liberal democracies – they are under constant attack from within. This is a far better state of affairs than being ruled by an authority who cannot be questioned. My opinion is that anyone who tells you that this particular person or that particular book is the sole truth, cannot be questioned, and that anyone who says anything different is wrong – well, they’re not talking about morality, they’re talking about power.
The words below by the late, great Richard Feynman sum up my  general viewpoint far more eloquently than I could. He’s not just talking about science…
THE ROLE OF DOUBT IN SCIENCE
The scientist has a lot of experience with ignorance and doubt and uncertainty, and this experience is of very great importance, I think. When a scientist doesn’t know the answer to a problem, he is ignorant. When he has a hunch as to what the result is, he is uncertain. And when he is pretty darned sure of what the result is going to be, he is in some doubt. We have found it of paramount importance that in order to progress we must recognize the ignorance and leave room for doubt. Scientific knowledge is a body of statements of varying degrees of certainty — some most unsure, some nearly sure, none absolutely certain.

Now, we scientists are used to this, and we take it for granted that it is perfectly consistent to be unsure – that it is possible to live and not know. But I don’t know whether everyone realizes that this is true. Our freedom to doubt was born of a struggle against authority in the early days of science. It was a very deep and strong struggle. Permit us to question — to doubt, that’s all — and not to be sure. …

Through all ages, men have tried to fathom the meaning of life. They have realized that if some direction or meaning could be given to our actions, great human forces would be unleashed. So, very many answers must have been given to to the question of the meaning of it all. But they have been of all different sorts, and the proponents of one answer have looked with horror at the actions of the believers in another. Horror, because from a disagreeing point of view all the great potentialities of the race were being channeled into a false and confining blind alley. … The dream is to find the open channel.

What, then, is the meaning of it all? What can we say to dispel the mystery of existence ?

If we take everything into account, not only what the ancients knew, but all of what we know today that they didn’t know, then I think we must frankly admit that we do not know.

But in admitting this, we have probably found the open channel.

This is not a new idea; this is the idea of the age of reason. This is the philosophy that guided the men who made the democracy that we live under. The idea that no one really knew how to run a government led to the idea that we really should arrange a system by which new ideas could be developed, tried out, tossed out, more new ideas brought in: a trial and error system. This method was a result of the fact that science was already showing itself to be a successful venture at the end of the 18th century. Even then it was clear to socially minded people that the openness of the possibilities was an opportunity, and that doubt and discussion were essential to progress into the unknown. If we want to solve a problem that we have never solved before, we must leave the door to the unknown ajar. …

It is our responsibility to leave the men of the future with a free hand. In the impetuous youth of humanity, we can make grave errors that can stunt our growth for a long time. This we will do if we, so young and ignorant, say we have the answers now, if we suppress all discussion, all criticism, saying, ‘This is it, boys! Man is saved!’ Thus we can doom man for a long time to the chains of authority, confined to the limits of our present imagination. It has been done so many times before.

It is our responsibility as scientist, knowing the great progress and great value of a satisfactory philosophy of ignorance, the great progress that is the the fruit of freedom of thought, to proclaim the value of this freedom, to teach how doubt is not to be feared but welcomed and discussed, and to demand this freedom as our duty to all coming generations.

From “What Do You Care What Other People Think?: Further Adventures of a Curious Character” by Richard P. Feynman. Copyright (c)1988 by Gweneth Feynman and Ralph Leighton. By Permission of W.W. Norton & Company Inc. All Rights Reserved. Feynman is a Nobel Prize winning physicist considered by many to be the father of quantum electrodynamics.