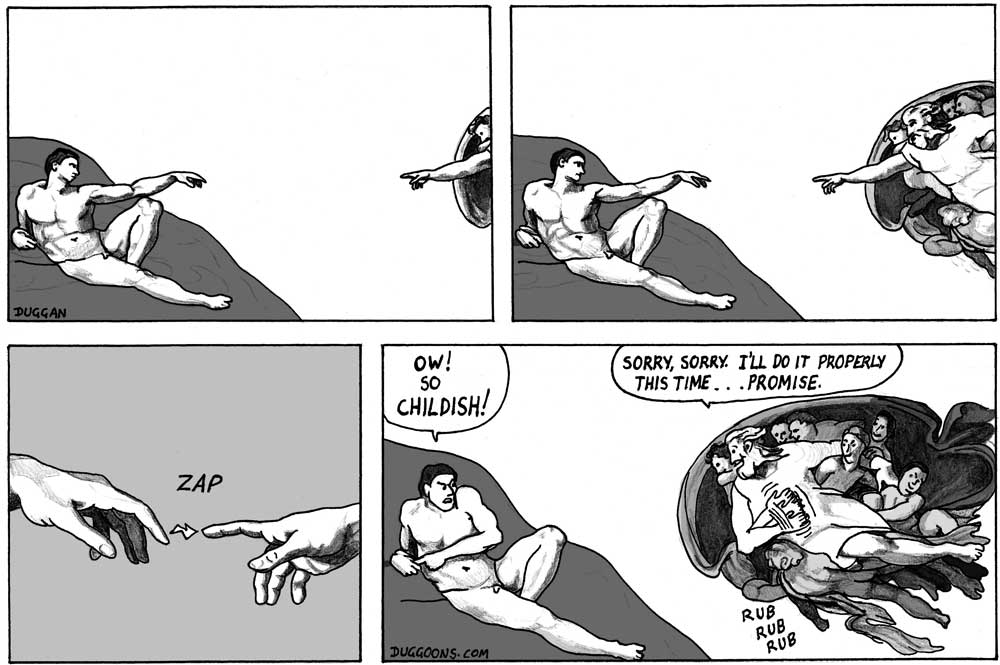 First published in The Guardian online 18 September 2013
If you were commissioned to paint “God creating Adam” how would you do it? A particularly brilliant solution is Michelangelo’s idea of the pointing index fingers, a split second before life is zapped into Adam (I guess it’s a split second; it all depends on how fast God’s traveling). It’s such a clear, striking image, conveying everything that needs to be said. Michelangelo would have been so good in advertising. What a missed opportunity for humanity.
Thinking about the spark of life led to this cartoon on static electricity.  I guess the humour resides in the Almighty revelling in childish pranks. But I think creativity is, at its essence, about fun. And God was quite creative. So I reckon this kind of thing would have happened all the time. Those serious types who wrote the Bible were quite dismissive and contemptuous of this side of God’s personality, so they left it out. It reminds me of something Picasso once said; annoyed by the very solemn, grave attitude toward art of some Germans visiting his studio, Picasso told them “I like to laugh”.
If you’re reading this I presume you’re in the same boat.
Apologies for being a bit quiet of late. I have just moved house, which has been, as always,  intensely stressful and exhausting. However I have gleaned a nugget of wisdom from the process, which I hope will help you in your life – Stay Put.
Written by
Peter
Posted in
Uncategorized
Tagged
Michelangelo
Comments
Leave a comment 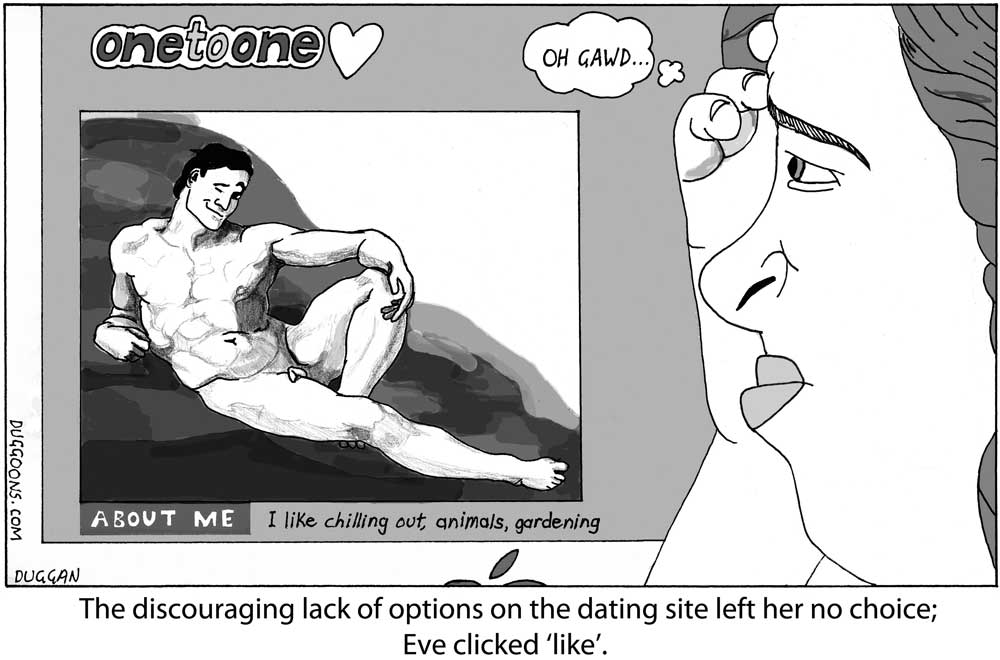 Recently I had an idea for a joke based on Michelangelo’s painting of Adam on the Sistine Chapel ceiling and had been wracking my brain to find a funny solution to it. It’s something I still haven’t cracked, but in search of inspiration I lay on the couch and took up the pose of Adam, just to see what it felt like. It was amazing. Try it at home. You will be overwhelmed by a sensation that you have become someone else.

For the joke to work properly I had to get both Adam’s and Eve’s expressions right. Draw, draw and redraw. The human face has so many subtly different expressions. With Eve I ended up drawing an expression of disgust in the lower half of her face and fear in the upper half. It seemed to convey the mixture of revulsion and apprehension I was after, which was pleasing.

Oh, and for those whose first language isn’t english, “gawd” is simply a long drawn out way of saying “god”, as an expression of fear or surprise. In Eve’s case it kind of means “Oh no. Am I really doing this?” Yes you are Eve, yes you are.