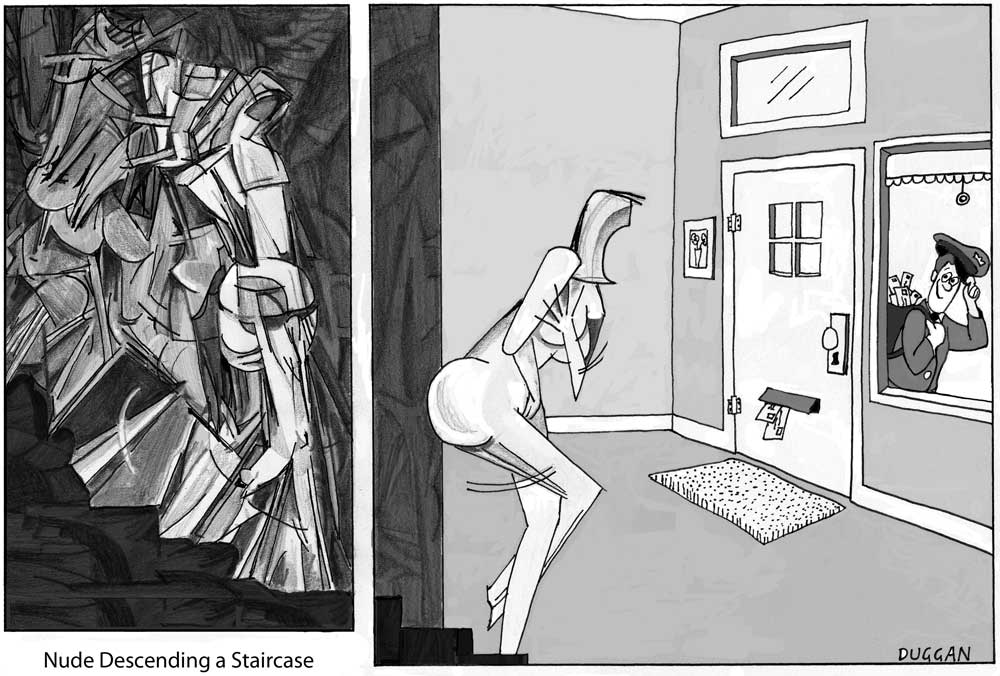 Nude Descending a Staircase by Marcel Duchamp was exhibited in the Armory Show in New York in 1913, which was the first proper taste of European avant-garde art in America. Out of all the works shown this was the one most mocked and caricatured by the press and subsequently became, for decades, the emblem for the extravagances of modern art as a whole. When Duchamp arrived in New York from Paris two years later in 1915 he was, even for the general public, the man who painted Nude Descending a Staircase.
The funny thing was that the first time he tried to exhibit it in Paris, at the Societe des Artistes Independants in Paris in 1912,  it was rejected on the grounds that its title was too literary. Also, it was too Futurist, which was an Italian art movement – the French Cubists were firmly against foreign trends (aaah, xenophobia…… what a lovely trait).
But Duchamp was a very clever, cunning bloke and had a very useful knack for setting the cat amongst the pigeons. By the time he arrived in New York a group of artists there had formed the Society of Independent Artists. This was based on ideas of freedom in art and against what they saw as the evils of the jury system in selecting the work that hung in the big, official exhibitions. They decided to hold their own exhibition. There was to be no selection – if you paid your work was hung. They asked the celebrated avant-gardist Marcel Duchamp to be president of the hanging committee. Unfortunately for them Duchamp submitted a urinal under the pseudonym of Richard Mutt. Against all their own rules they rejected it. Duchamp resigned. Scandal erupted. Egg on faces. And the readymade as an artform was born.
This cartoon was one of those times where I sat down, stared at the artwork and didn’t move until I got a joke out of it. Another time was here.
Written by
Peter Duggan
Posted in
Uncategorized
Tagged
Chris Burden, Edward Hopper, Hans Holbein, Marcel Duchamp
Comments
Leave a comment

First published in guardian.co.uk on 5 September 2012