What’s the difference between a painting of a flag on a piece of canvas and an actual flag? Unbelievably, this was a question Schopenhauer and Nietzsche had never asked themselves. 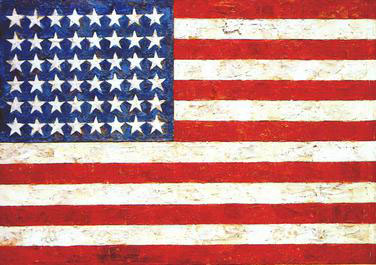 But it’s an interesting conundrum which was introduced into Western Art when Jasper Johns actually painted one. And he was being serious! This was at a time when almost the only art considered serious was Abstraction. Painting a flag also meant that the artist had lost the freedom to choose his colours or composition. So you can see that lots of interesting problems were raised, which the critics absolutely loved. So much so that the Museum of Modern Art in New York bought three of them from Jasper’s very first show in 1958. Not bad. But first he had to solve the problem above.