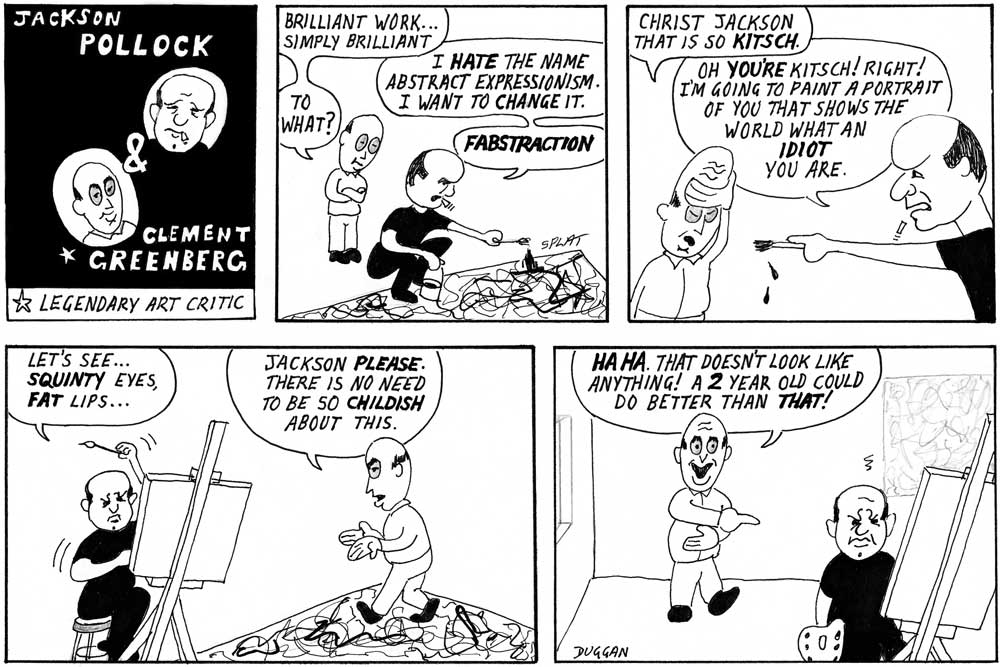 First published in guardian.co.uk on 25th May 2011

At the moment my cartoons come out once a fortnight in the Guardian. However I try to write one blogpost per week. This is a dilemma that I have lately solved by writing on the subject of nothing every second week. Now though I will now dredge up an older cartoon for the in-between weeks and write about that. This is to keep you amused.
You probably won’t fully get this joke unless you know that Clement Greenberg was an extremely influential art critic and that he loudly proclaimed the work of Jackson Pollock to be the pinnacle of great contemporary art. Greenberg’s ideas on art and where it should be headed were pretty much gospel from the 1940s right into the 60s. It seems unimagineable that today someone could wield that kind of dogmatic influence on what artists should be doing. For a long time Abstract Expressionism was the only art style for any serious artist. It was very difficult to be taken seriously if you were a realist painter in those days, and you were particularly silly if you painted portraits. You might as well have been painting christmas cards. Fortunately, time and talented tough nuts like Lucian Freud and Alice Neel have done a lot to change that. I am very fond of this cartoon for a couple of reasons – I find it really funny and it was the eventual trigger for my career as an artoonist. As is my annoying wont, I was riffing out loud at work (an art gallery) one day about the name of an exhibition we had on at the time – Fabstraction. I was just imagining how it would go down if suggested as the name for a serious new art movement. This is what came out. I found it amusing and for once so did the other guys. I really liked the idea and thought I would have to use it one day – but how? I used to make short films but Ed Harris was apparently booked up for 18 months – I slammed the phone down in his ear. Eventually I drew it as a comic – my first. After a while I tried my hand at a few more art cartoons and the rest is history. This is the normal career path for an artoonist, which was spelt out in uncanny detail by my school’s Careers Guidance Counsellor many years before. Actually, my 15 minute Careers Guidance session at school went something like this:
“What do you want to do?”
“I dunno.”
“What subjects do you like?”
“I like Art…”
“You could be an Artist.”
“I like History…”
“You could be an Historian”
“Geography…”
“You could be a Geographer”
“English…”
“You could be an Englishman”
It was worse than useless, although I guess I’ve had a stab at the last one.

By the way, there is absolutely nothing wrong with an unserious name for an art movement. Look how successful PLOP art was! 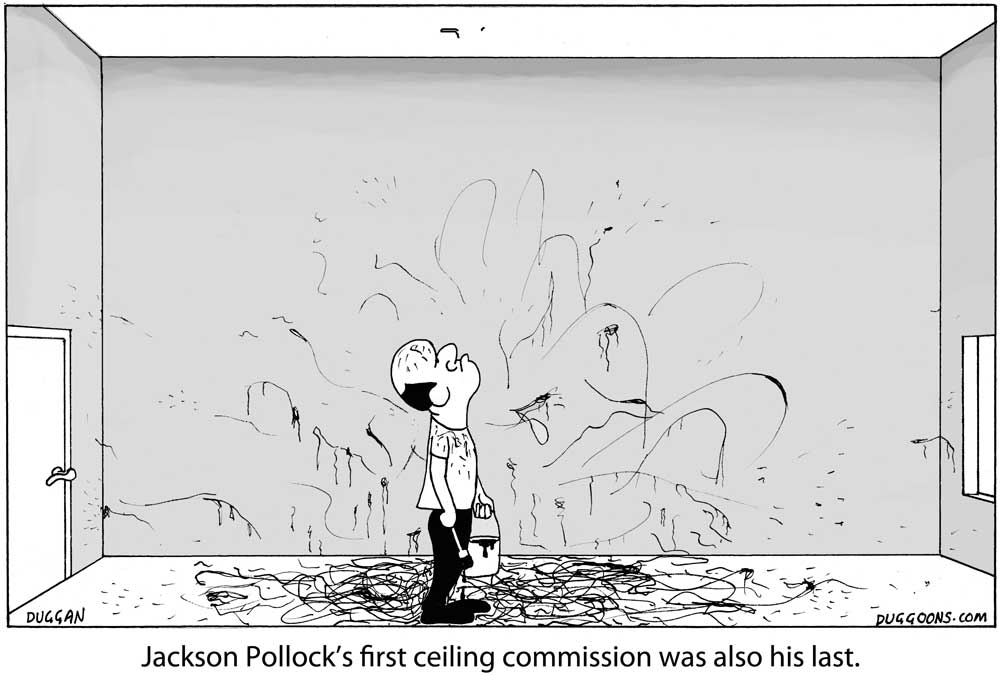 Just makes you realise how essential gravity was to Pollock’s technique.

In case I’ve confused anyone, I prefer the term gravity to the more familiar warping of the space-time continuum. Born lazy unfortunately.

First published in guardian.co.uk on 21 March 2012