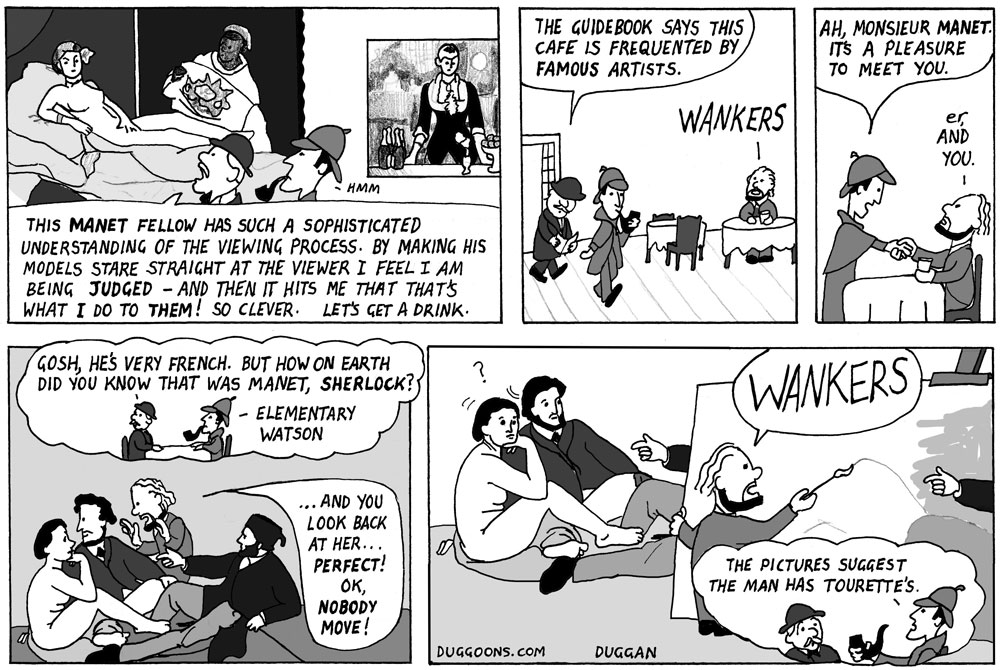 First published in The Guardian, 2 April, 2014.
Manet was a radical artist in many different ways. His painting technique was not the standard polished perfection of the time but had visible brushstrokes that veered between sketchy and thick and creamy. He created stark juxtapositions of light and dark, often doing away with mid tones altogether. He mixed up standard conventions so that critics found it hard to comprehend his purpose. His compositions were often arranged in a deliberately jarring manner. No wonder he got under the skin of the critics.
There were lots of nude women in paintings in the 18th and 19th centuries but this was not considered pervy because these representations of women were shown under the “acceptable” veneer of religion, history or classical mythology. I guess it was begging to be done by someone but this hypocritical cloak of respectability was pulled away by the 31 year old Edouard Manet in 1863. In two paintings of that year, Olympia and Luncheon on the Grass, he called it for what it was – checking out ladies in the buff. Olympia is simply a naked prostitute, in a similar pose to Titian’s revered Venus of Urbino. Luncheon is particularly provocative. Two men in contemporary clothes  having a picnic with a woman who has taken all her gear off. These are normal people – there is no pretence that this represents any scene from the repertoire of “culture”. It’s not mythology or religion or history – it’s just a woman starkers with a couple of blokes.
I had increasingly noticed that Manet had a habit of making his models stare directly at the viewer. His already provocative imagery is ramped up a few more notches by this confrontational tactic. His work must have been incredibly shocking in its time. When you look at samples of officially sanctioned nudes in the yearly Salons of the 19th century it is increasingly obvious that the respectable cloak of myth or history barely covers the fact that the point of the picture is to check out hot bods. Eventually Manet just called a spade a spade and did away with the hypocrisy. Don’t get me wrong – there’s nothing wrong with admiring a nude form. Manet was just being blatant about what was actually going on.
The model staring straight back at the viewer makes the viewer even more self-conscious and uneasy about their perving. They are caught in the act. But, of course, when the model looks at the viewer she is, in reality, staring at the artist who is painting her. In attempting to come up with an idea for a cartoon I tried to think of a reason why Manet’s models would keep staring at him. A physical deformity perhaps? Some weird personal mannerism or tic? Ah! As many people are aware, one form of Tourette’s syndrome is the involuntary exclamation of obscene words or socially inappropriate remarks. Thinking about which swear word I could get away with I remembered that the winner of UK Big Brother a few years back was a guy with Tourette’s who would uncontrollably yell out “Wankers!” whenever he got excited. That was prime time TV so I figured I was safe with it. Bizarrely his name was Edouard Manet. I’m joking about the last bit, but since I can’t remember the guy’s name, there is a very faint chance that his name WAS Edouard Manet. If that is the case it would mean that I am not an original thinker but a forgetful copyist. I’m not even going to look it up on the internet now. My dashing, ground-breaking self-image could be crushed.
Sherlock Holmes was just a handy tool, from the right time period, to drive the cartoon. Throwing in something silly like that in an effort to get from A to B to C often leads to unexpected scenarios. I was amused when the cafe scene came about. The “Gosh, he’s very French” comment makes me laugh. It’s very satisfying when the attempt to tie it all together leads to funnier side things. I imagine this happens to novelists all the time. You feel like a spectator because you didn’t see it coming.
Sherlock Holmes would never experience this lovely feeling because he sees everything coming. Every time I accidentally step into a pothole and smash my face I feel the warm glow of confirmation that in a crucial respect I am superior to Sherlock Holmes.
Written by
Peter
Posted in
Uncategorized
Tagged
Edouard Manet, Gustav Klimt, Henri de Toulouse-Lautrec, Leonardo Da Vinci, Pablo Picasso, Venus de Milo
Comments
Leave a comment 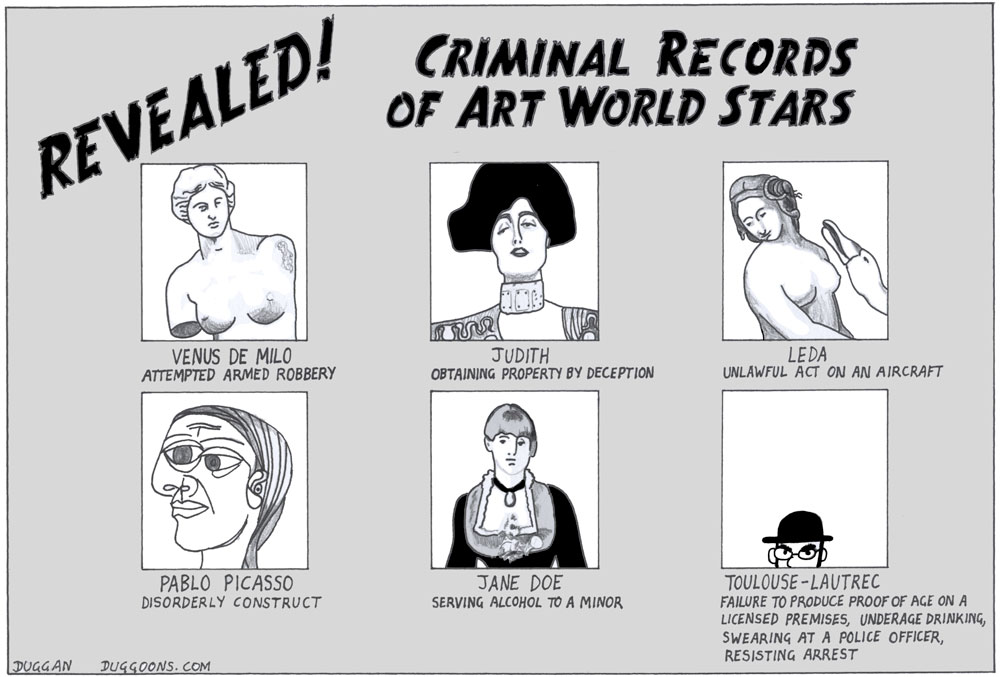 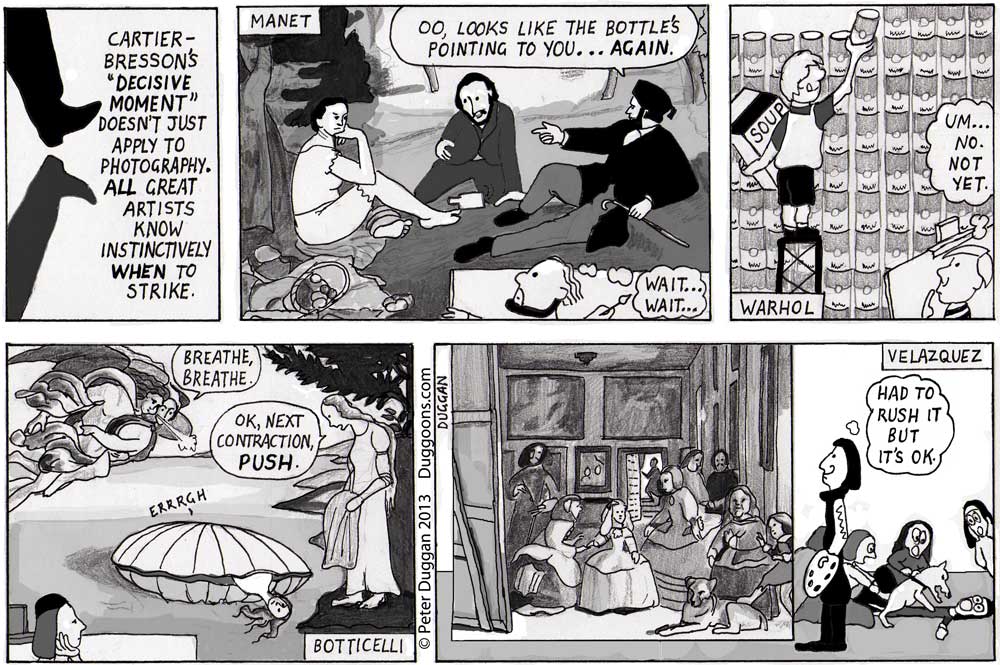 Here I had fun playing around with the difference between the instantaneousness (fifth time this morning I’ve used that word) of photography and the far less speedy medium of painting (something I also explored in this cartoon). The photographer Henri Cartier-Bresson was renowned for his freakish skill in capturing “decisive moments” – combinations of fleeting, interesting action with perfect composition. The four artworks I used here are Luncheon on the Grass, 100 Soup Cans, The Birth of Venus and Las Meninas. I felt slightly uncomfortable with my take on the Birth of Venus. Even though I take lots of liberties with art history, I am well aware that Venus was not actually born from a bi-valve mollusc but from white bubbly sea froth. Still, it made me laugh, so I put it in. The blowing zephyrs in Botticelli’s painting fit nicely with this birthing scenario.
A pleasing side-effect of copying famous paintings  is an increased appreciation of some of their subtleties. In the Velazquez, as always with him,  there are the astonishing excellencies of all the figures’ postures and expressions. But in this instance I was particularly impressed with that slice of wall on the extreme right. He has made a plain slab of wall so interesting with all the tonal changes going on – a blaze of sunlight, a sliver of picture frame casting a shadow. But I was even more taken with the next picture along,  hanging just around the corner. You can actually see the picture in that frame, despite its extreme angle. It is so clear, and so perfectly gauged in terms of darkening tone. Admittedly my copy is slightly better than the original but that shouldn’t take away from Velazquez’ achievement.
David Hockney believes that old masters like Velazquez must have used a camera lucida to achieve such accuracy painting fleeting facial expressions. When you see things like the open mouthed young blacksmith, painted by Velazquez, in Vulcan’s Forge (which shows Apollo telling Vulcan the jaw-dropping news that his wife Venus is having an affair with Mars – personally I wasn’t surprised) it really is hard to credit that such feats are humanly possible. But I believe Hockney is wrong. There are so many other unbelievable feats of skill in this painting – the perfectly judged scale of light to dark creating a room full of space and light; the loose yet completely accurate brushmarking – that it seems unfair to single out this one thing and say “he couldn’t possibly have done this unaided. ” I think it is telling that the other sublime master of facial and bodily expressions, Rembrandt, was also phenomenally brilliant at every other aspect of painting. Hockney’s theis would hold more water if there were loads of artists in the pre-photographic era who were great at fleeting facial expressions but crap at the other stuff. But there isn’t. It just happens that occasionally someone is born with a once-in-several-generations talent, which combines with the right aptitude, the right training, great ambition and lucky social circumstances. These people are known as wankers.
Written by
Peter
Posted in
Uncategorized
Tagged
Claude Monet, Edouard Manet
Comments
Leave a comment 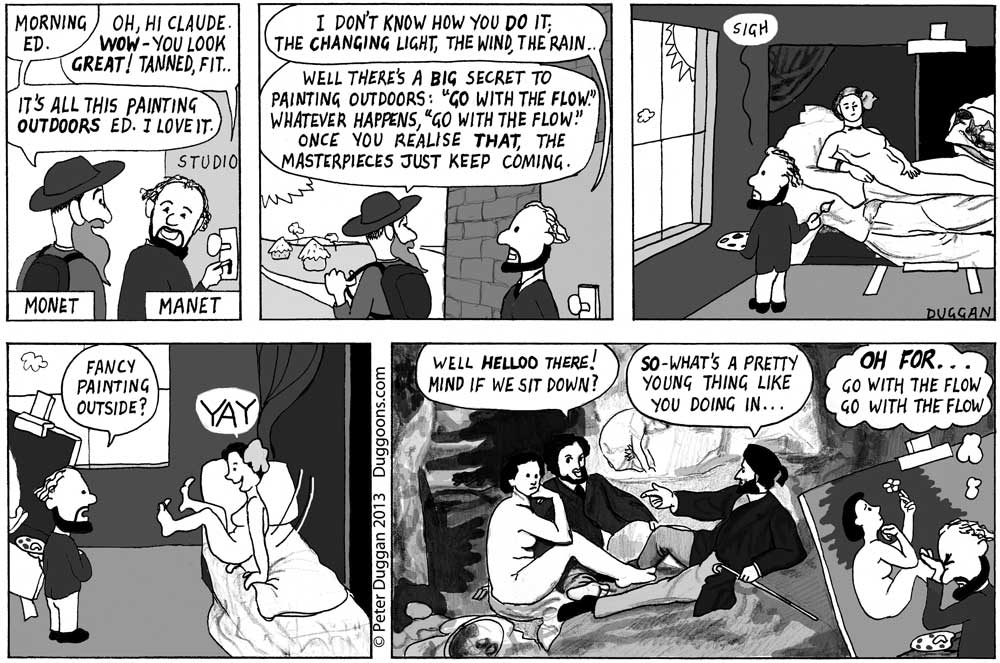 First published in guardian.co.uk on 6 February 2013

Edouard Manet and Claude Monet having a chat. There is a nice link between the two paintings Manet is working on in the cartoon. Both – Olympia and The Luncheon on the Grass – were painted in 1863 and both feature the same model, Victorine Meurent. So yes, this is what actually happened.