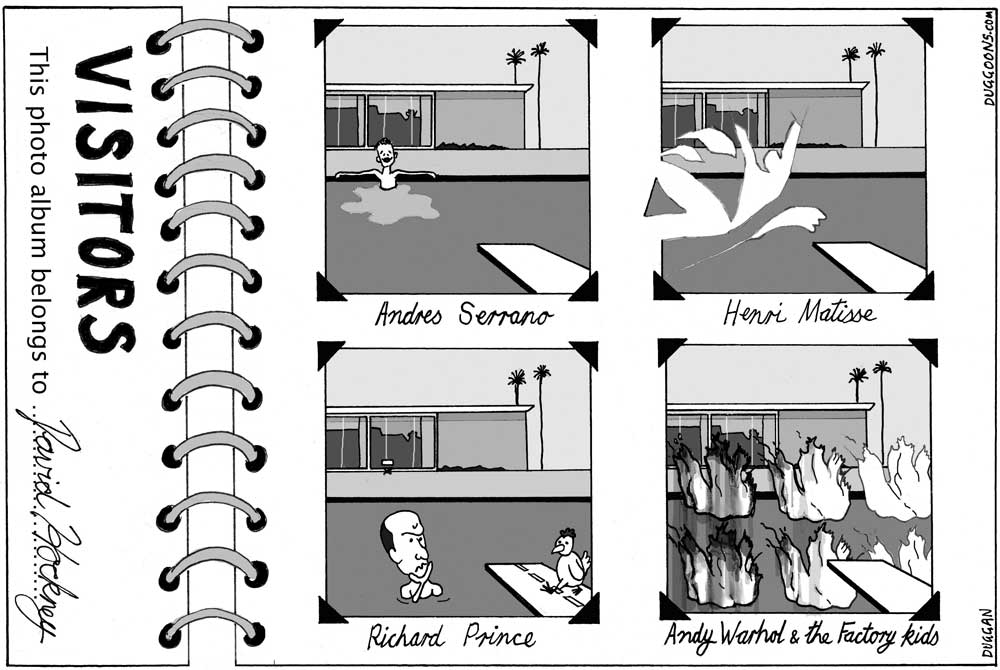 The subject matter for these Artoons is the artworld (“What the…? Really?”), and in attempting to create humour I have the problem of gauging how far I can rely on the audience’s knowledge of art to get the joke. It came as a great surprise to me, but studies have proved that people actually have different levels of art knowledge. So apparently it was a mistake to assume that everyone out there reading them is exactly like me. I guess that’s obvious – if they were the planet would be down the tubes in five seconds, with the soon-to-be-extinct human population laughing together in joyous communion over the latest Peter Duggan artoon.

Anyway, it took me quite a long time to get my head around this dilemma. Where to draw the line? Well, I have come to the conclusion there are several lines – each delineating different categories, and here they are…

(1) You don’t have to know anything about art to get the joke. This category can be divided into:

(1a) The artwork is illustrated in the cartoon and there is nothing else needed to get the joke beyond what you see; and

(1b)  The artwork is so famous it’s part of the general culture.

(2) The artwork/artist is explained within the cartoon, followed by the punchline.

(3) You need to know the artist/artwork to get the joke.

The best category, from the point of you of maximum audience, is category 1. The size of the audience (well, appreciative audience) goes down as you go down the list. This doesn’t mean that they are less funny. In fact, most of the ideas I come up with, and a lot of the ones I think are funniest, are in category 3. However as time goes on I veto more and more of them, as the knowledge that I am writing for a newspaper and not an art magazine weighs more heavily on me.

This is all a long-winded introduction to the artoon above. It’s a category 3 artoon which I deliberately threw in to keep the more hardcore art afficionados (and myself) happy. My audience dropped accordingly – oh well. One day I hope to fill up an entire photo album with David Hockney’s visitors. Here are some other pages. For those who may not know, here’s a little explanation of the artists/artworks depicted in the artoon:

The artworks Henri Matisse created in his old age were mainly paper cut-outs.

Andy Warhol – this was a nod to both his serial imagery and to the screenprinting process with its over and under-inking.

Richard Prince is known for his paintings of jokes. When a friend saw this artoon on the web and was trying to figure it out she said to me “The chicken is crossing a road. Why’s that?”

Andres Serrano is infamous for his Piss Christ, a photograph which caused a massive stink with some US senators in 1989. Later he caused an even bigger stink with his Poo Chr………….groan, sometimes I disappoint even myself.

First published in guardian.co.uk on 9 May 2012