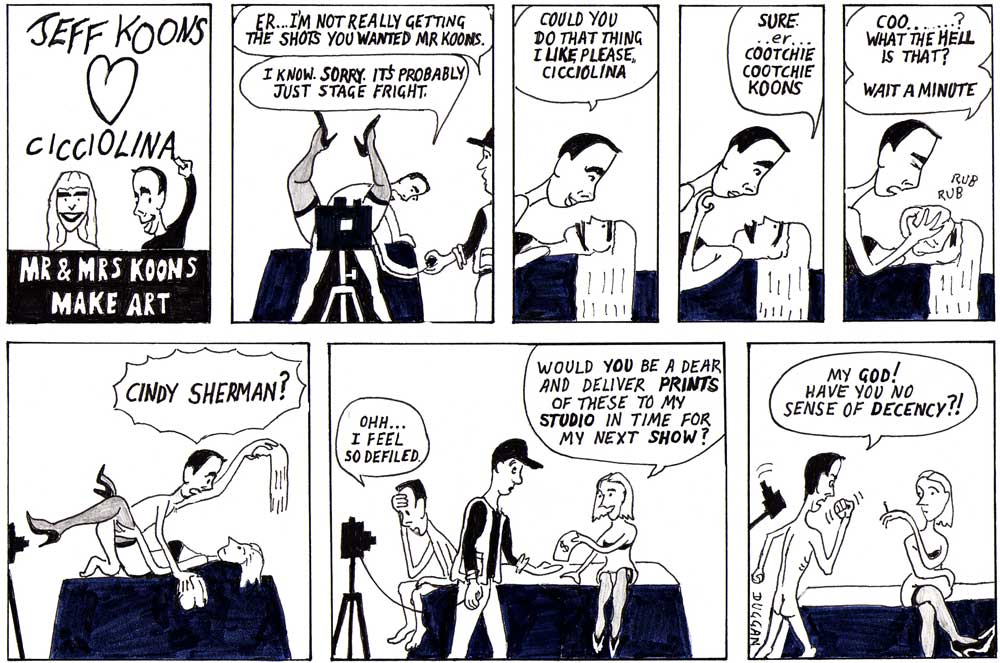 The artist Cindy Sherman has made a whole career in taking photos of herself dressed up as someone else. The initial impetus for this cartoon was thinking of how she could turn up as someone else – but as who, and where? This was the most inappropriate place I could think of. How does one explain the phenomena of Jeff Koons? He uses kitsch objects as the subject of his art. He has declared that there are no hidden meanings in his work. I’m of the view that he’s telling the truth. He is extremely successfuI.

So what does this say about the artworld? I’m all for mixing high and low art, and in any case the distinction these days is very blurry, considering the amazing things now being done in things like graphic novels, video games and art cartoons. However, when you start to believe that the stars of the contemporary art market are the pinnacle of what is best in art, rather than, much more reliably, a barometer of the current tastes of the insanely rich, there is a danger that vacuousness will be mistaken for profoundity.

When Koons made his “Celebration” series of massive sculptures of things like kid’s toys, I thought they were typically striking and typically dumb baubles for the art market. Much later I read that he made them as a way of letting his lost son (abducted by Cicciolina) know he was thinking about him. My god, that’s a real feeling! I get very surprised by the odd glimpse of a real feeling in his work. Perhaps this is a damning example of my lack of perception and empathy, though I believe it’s as much a measure of the mind-numbing blandness of the majority of his work that things like this stand out so starkly. The same goes for that other savant of banality, Andy Warhol. In the tribute album to Andy Warhol “Songs for Drella” by Lou Reed and John Cale (a great album), Reed sings about Warhol berating him for not writing enough songs (at the time Warhol was the manager of their band The Velvet Underground) “You should have written 15. The most important thing is work!” Reed knew he was really mad because he called him a rat, which was apparently the worst word he could think of. There is also a song called “Open House” which tells of Warhol hospitably inviting people around for tea, just like his mother did. All admirable values. So what do I know? As I said, I’m all for blurring distinctions. But maybe this is just a a clever way of saying I’m confused.