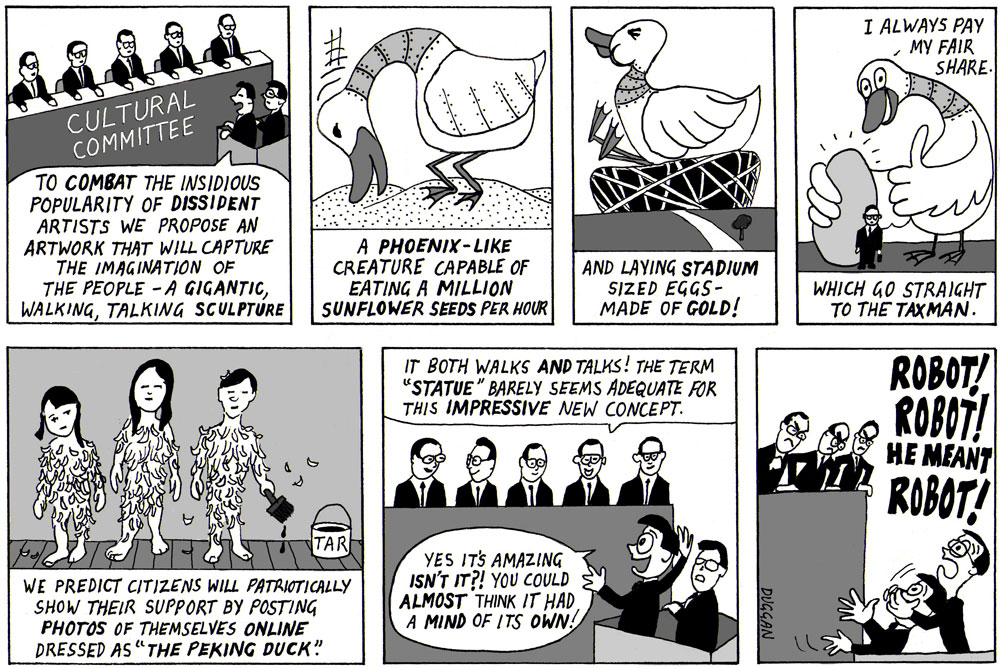 I have done a couple of cartoons on Ai Weiwei and in neither is he depicted or mentioned. The Chinese government were no doubt hoping for something similar when they abducted and effectively disappeared him in 2011. For a number of years he had been using his high profile to speak out on police brutality, official corruption and human rights violations. However a huge domestic and international outcry led Beijing to realise how damaging it was to hold China’s most famous artist in detention. Released after 81 days, he was accused of tax evasion and given a fine of 15m yuan (US$1.85 million dollars). It is thought that charging him with economic crimes allowed officials room for manoeuvre, whereas they would not have felt able to drop political charges.

In case the references in the cartoon are unfamiliar:

With the Swiss architectural firm Herzog & de Meuron, Ai Weiwei designed the famous Birds Nest stadium for the 2008 Beijing Olympics. He also created Sunflower Seeds, an installation of 100 million porcelain sunflower seeds, all individually sculpted and painted by Chinese craft workers. This was a commission for Tate Modern’s Turbine Hall, a portion of which the Tate subsequently purchased.

During his incarceration he was threatened with pornography charges because he had appeared naked in some of his artworks. In a show of solidarity many of his supporters posted nude pictures of themselves online.

I had avoided doing a cartoon on Ai Weiwei for a long time. Given the weighty issues involved, a cheap gag would have felt inappropriate. The clincher for me to finally have a go was something Ai Weiwei said in an interview. Paraphrasing, it was something like “Today, what is China known for?” The most populous country in the world, the second biggest economy in the world – it should be a leader in thought, science, artistic endeavour, etc, etc. But what is it known for? Making cheap consumer goods.” That really got to me. I have always been fascinated as to why some places, at a certain moments in time, experience a massive creative flourishing. Places like Athens, Florence, Paris, Vienna (a couple of times), Silicon Valley, etc – one thing that definitely doesn’t happen is the government clamping down hard on everything with which it disagrees.

A few words from him:

“Reflect on Bo Xilai’s case, Chen Guangcheng’s and mine. We are three very different examples: you can be a high party member or a humble fighter for rights or a recognised artist. The situations are completely different but we all have one thing in common: none of us have been dealt with through fair play, open trials and open discussion. China has not established the rule of law and if there is a power above the law there is no social justice. Everybody can be subjected to harm.”

“I’m just a citizen: my life is equal in value to any other. But I’m thankful that when I lost my freedom so many people shared feelings and put such touching effort into helping me. It gives me hope: Stupidity can win for a moment, but it can never really succeed because the nature of humans is to seek freedom. They can delay that freedom but they can’t stop it.”

One thought on “Peking Duck”