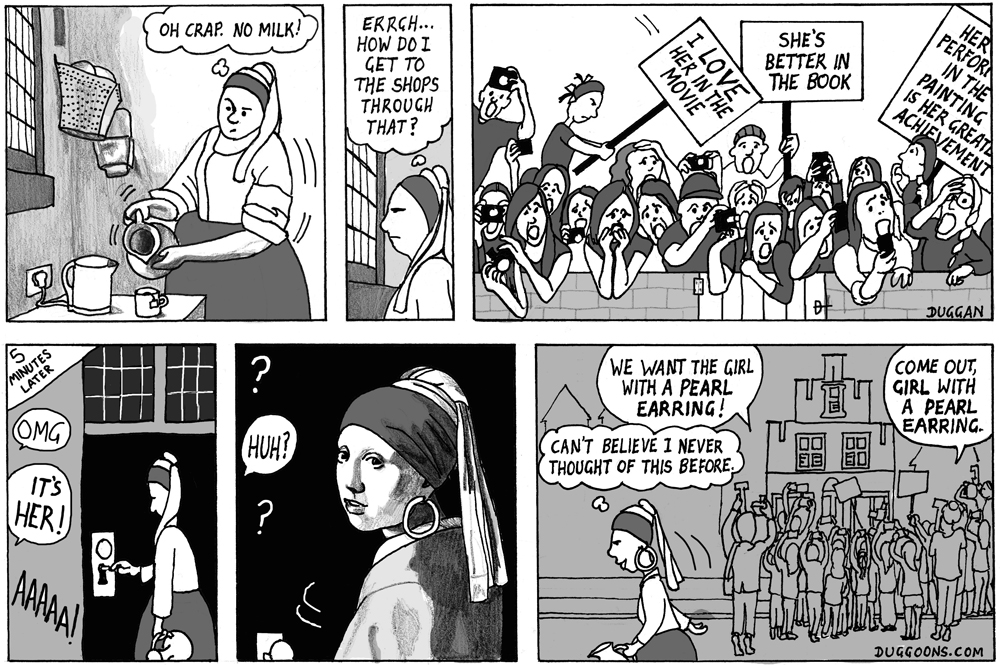 It’s interesting to witness an artwork becoming really famous before your eyes. When you think about it, fame (for a painting) is such a lottery. It is not, as one naively assumes when young, that the artworks of the highest quality are automatically the ones that are most feted. In very recent years Jan Vermeer’s The Girl with the Pearl Earring has started gaining momentum as a very famous picture. Its newfound popularity is due to the popular book by Tracy Chevalier and the subsequent movie starring Scarlett Johansen and Colin Firth. Not so long ago it was just another very nice painting by Vermeer. Now, at The Mauritshuis in The Hague, it has large crowds thronging around it. Is there a better word in English than thronging? I don’t think so. Sometimes, when I get bored waiting for a train, I will gather up a group of people and we’ll throng around something – sometimes a bicycle, sometimes something less interesting. Everyone feels great for having thronged that morning. Try it. There are few things in life that beat a good throng.

Now that we are living in the age of social media there are people – let’s call them experts (that’s a very useful word too. My wife used to be quite pert. Loads of people thought so. Not any more) – who have a pretty good handle on how the process of creating popularity works. I am sure they will see the rise of The Girl with the Pearl as a well executed example of how to do it. Don’t get me wrong. It’s a very good painting but I don’t think there is anything intrinsic to it that makes it stand out above the others in Vermeer’s excellent oeuvre.
Now that the momentum has kicked off I predict it will stay as one of Vermeer’s most famous paintings for a long, long time, perhaps a couple of hundred years. It will just be assumed to be one of Vermeer’s top three paintings. Perhaps the Milkmaid, which was once the image that came to mind when you said Vermeer, will be permanently knocked off its perch as the Vermeer cliche, replaced by a Girl who may or may not be wearing two earrings.
The cartoon shows her dealing with this fame. I wouldn’t be surprised to see her become a Greta Garbo-esque figure, shunning all forms of publicity. Clive James, in his excellent book of essays Cultural Amnesia, talks about handling fame. He said that a very famous man will have one or two nut jobs making their lives a bit of a hassle but a very famous woman will have loads of them and it would be very unwise not to consider them highly dangerous. A lot of court cases dealing with these stalkers are kept out of the public eye and he speculates that Greta Garbo’s attitude was perhaps just the most sensible, sane solution to this problem. I really hope nothing happens to the Girl With the Pearl Earring. I’ve met her a few times and she is very, very nice. Her real name, funnily enough, is Jan. Actually, to tell the truth, we dated for a while. As I said, she is really nice, but when I caught her shoplifting I decided to call it quits.
DISCLAIMER: My wife is extremely perty. Still.
Leave a Reply Cancel reply