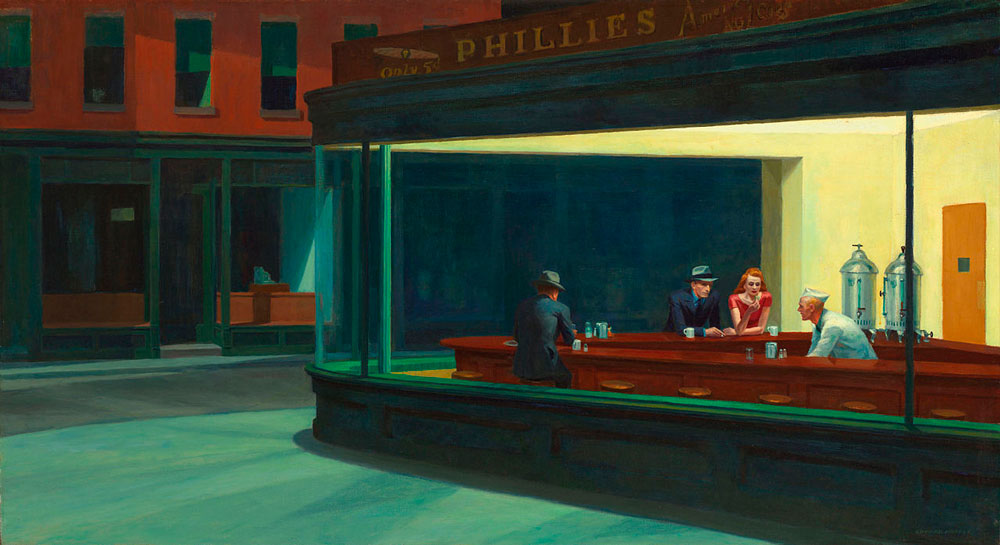 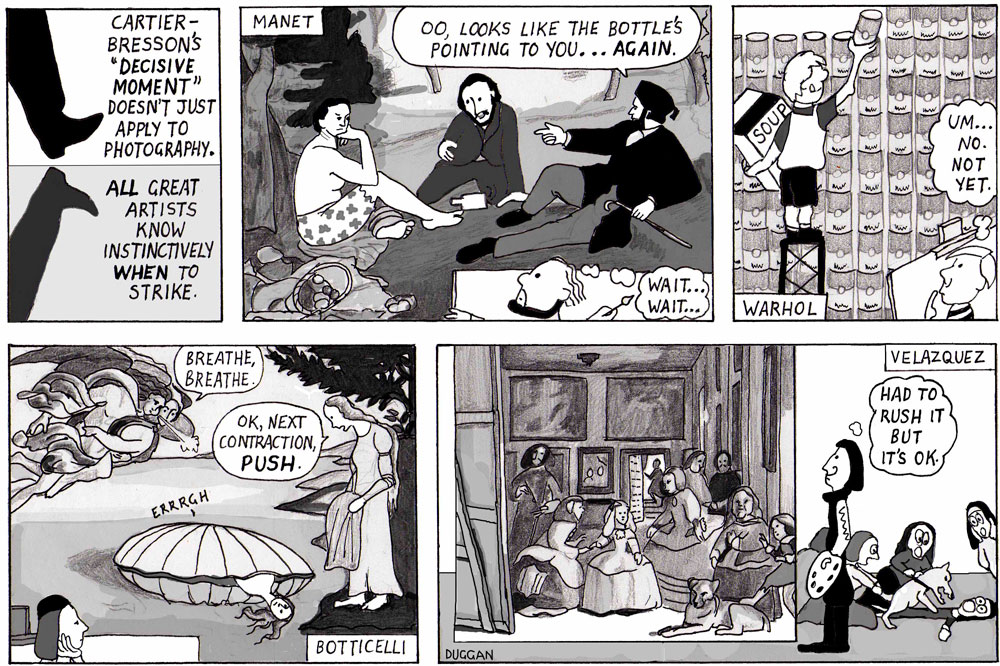 Just noticed a review of the French version of my book in BD Gest’, the premier francophone site for comic reviews – see here. I am very proud to say it was rated 4 out of…eh?…WTF?

It is with a sarcastic and slightly envious eye that Peter Dunggan (that’s me) decrypts in his own special way the art world in (C) artoons, a cheeky history of art in comic form. With irony first of all, because it constantly highlights the shortcomings of this microcosm of artists with bloated egos and collectors frightened to miss the fashion of the moment. But also with envy and admiration, because faced with the masterpieces that have changed the way mankind looks at itself, how could it not be? But above all, it also does it with lots of humour and mischievousness.

With a sure artistic knowledge, the author likes to stage sculptures, paintings and other artworks,  as well as their creators, in often absurd or grotesque situations. The references are innumerable, sometimes obscure (happily, an index of the artworks used is presented at the end of book and allows to us to navigate), but always finely employed. If the compendium has been thought through with lucidity and intelligence, the graphic treatment is unfortunately not at the same height. The style’s lack of maturity and its line seem straight out of an amateur fanzine.

The option to oppose voluntary clumsiness and proven control might have been interesting, but this is unfortunately not the case. Pity, because the observations of Dunggan demonstrate great wit and mockery.

I probably can’t argue too much here (except for the score – 4 out of a billion seems harsh). Coming from a non-cartooning background I feel a bit awkward in the company of polished cartoonists, especially when reviewed in a country that treats cartooning with such massive (and well deserved) respect.

For an insight, this from Wikipedia…

These countries (France and Belgium) have a long tradition in comics and comic books, where they are known as BDs, an abbreviation of bandes dessinées (literally drawn strips) in French. The term contains no indication of subject matter, unlike the American terms “comics” and “funnies”, which imply a humorous art form. Indeed, the distinction of comics as the “ninth art” is prevalent in Francophone scholarship on the form (le neuvième art), as is the concept of comics criticism and scholarship itself. Relative to the respective size of their countries, the innumerable authors in the region publish huge numbers of comics. In North America, the more serious Franco-Belgian comics are often seen as equivalent to what is known as graphic novels. But whether they are long or short, bound or in magazine format, in Francophone Europe there is no need for a more sophisticated name than bandes dessinées, as this term does not itself imply something frivolous or humorous.

Perhaps it’s time for a slight manifesto. Without doubt there is a ton of non-feigned amateurishness in my cartooning style (and especially early on) but I also keep doing a couple of very amateurish things on purpose – I use an unvarying line width (things always looked more polished by varying the thickness of the line) and I avoid any modelling on the cartoon characters. That’s probably pretty dumb. But to be honest, there’s a strong element in me that distrusts facility. I like it a bit klutzy. It feels more human.

It was indeed my intention to balance well drawn elements (the artworks) against naive ones. I have discovered it raises a lot of tricky, interesting questions that keep me (over)balancing on the edge of disaster.  My main goal is just to draw something amusing. If it looks a bit silly then so much the better (though I suppose I should avoid crap-looking). 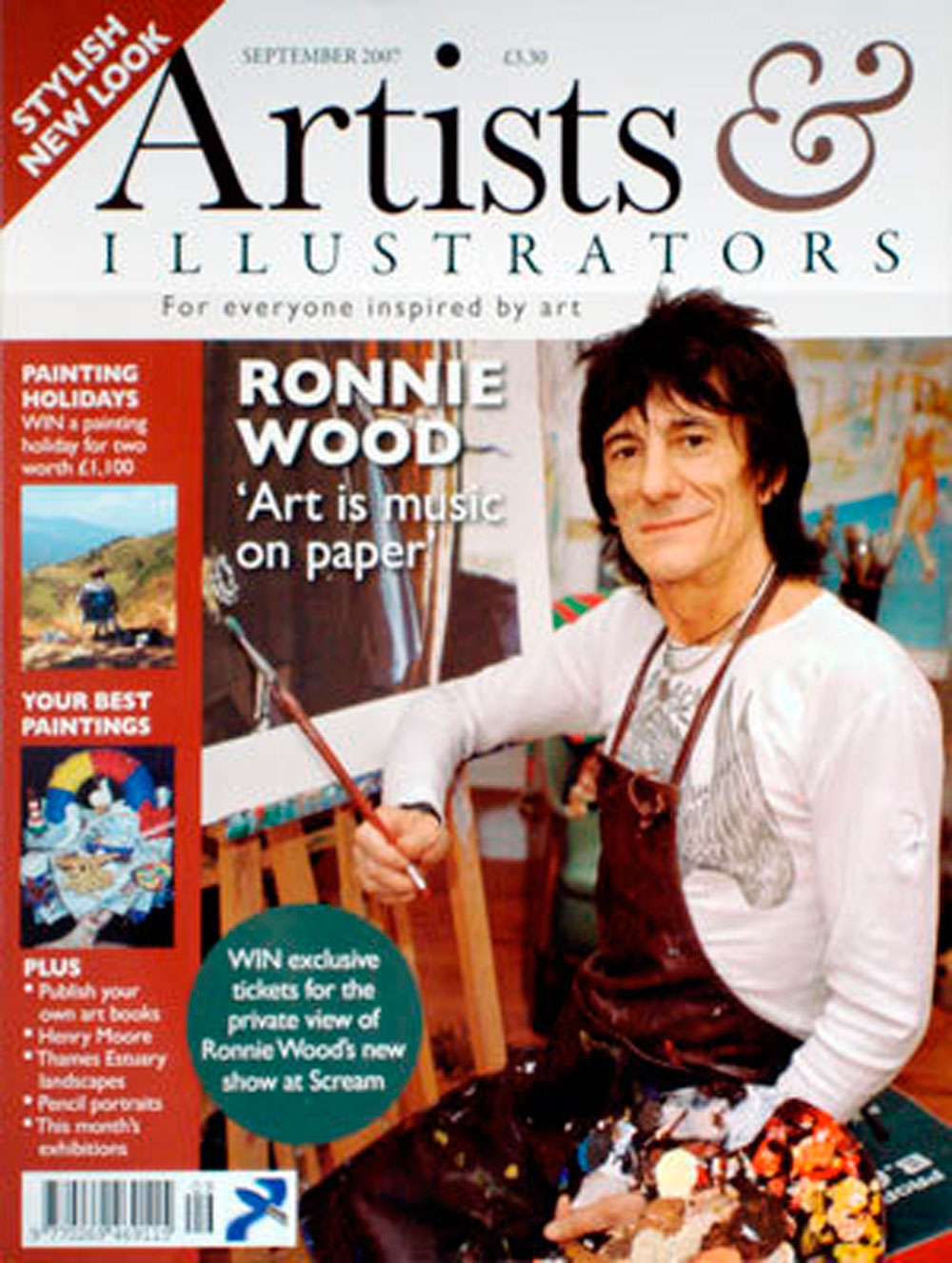 Artists & Illustrators magazine have a piece about my artoons on their website. You can read it by clicking “Continue Reading” to enlarge this page, then click on THIS! 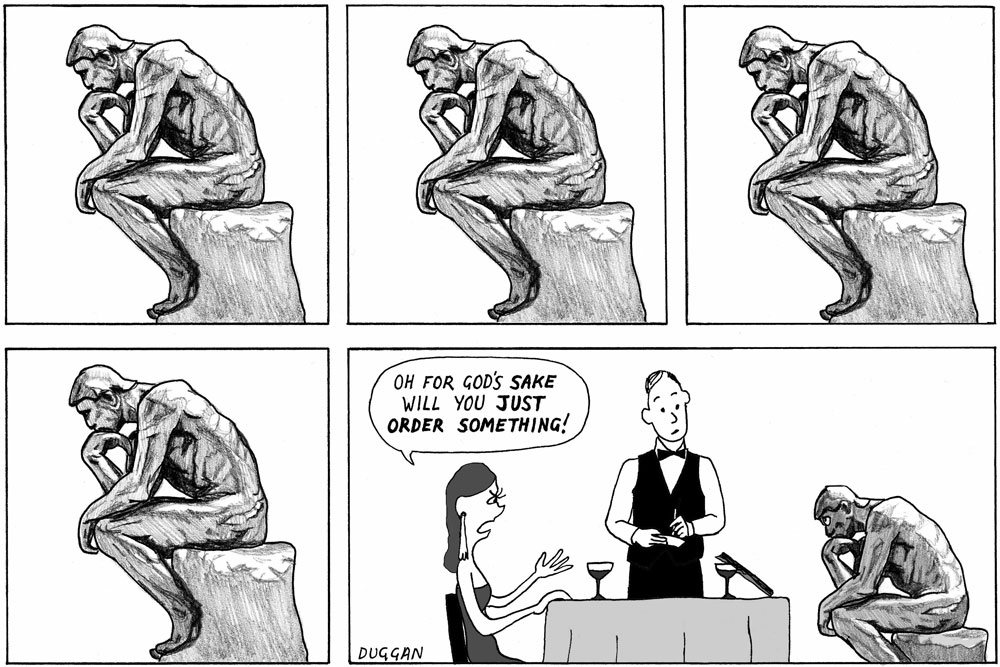 The book blog Random Things Through My Letterbox has posted a very nice review of my book. You can view it by CLICKING THIS SERIES OF WORDS IN CAPITAL LETTERS. 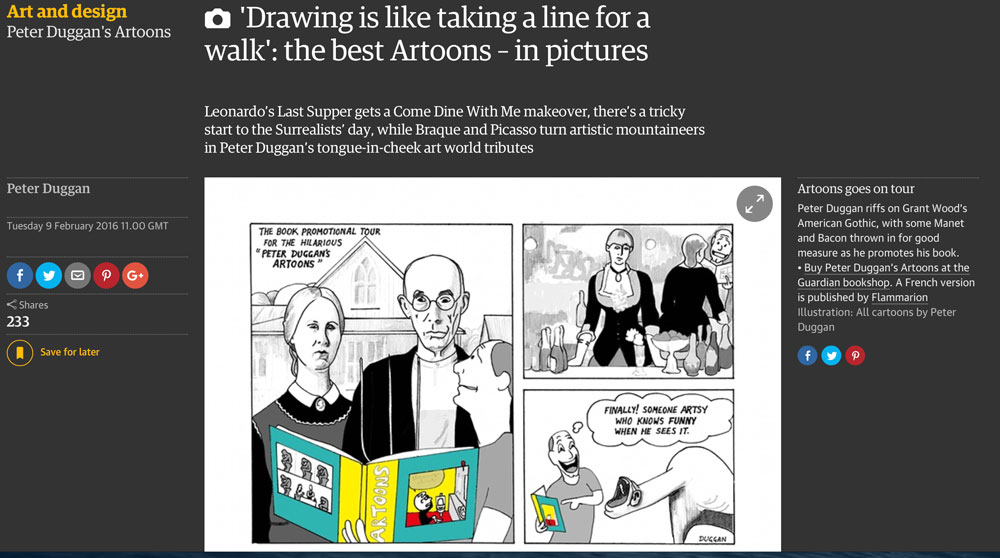 The Guardian has just posted a gallery of my Artoons – none of which have appeared in The Guardian before. Extremely nice of them!

You can view it by clicking on this link – http://www.theguardian.com/artanddesign/gallery/2016/feb/09/best-artoons-gallery-peter-duggan-in-pictures. (If it doesn’t work you have to click on “Continue reading” on the bottom right side of this post – it makes the blogpost live, and not just a preview) 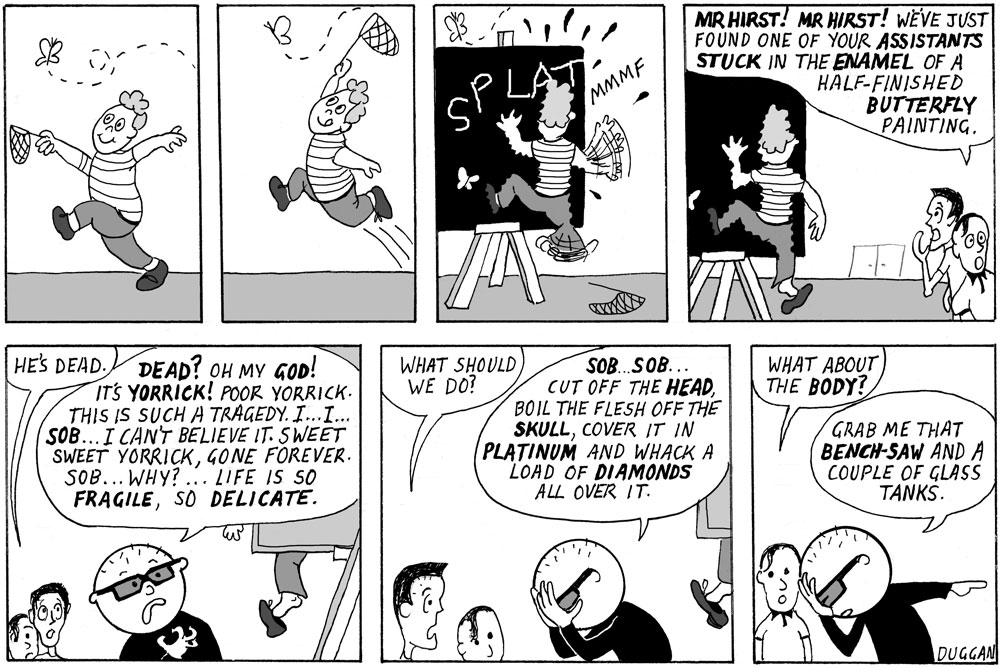 In case you don’t know the works of Damien Hirst, here are some clickable samples:

There are more mushy cartoons like this in my book, Peter Duggan’s Artoons, now out in Australia and New Zealand as well! 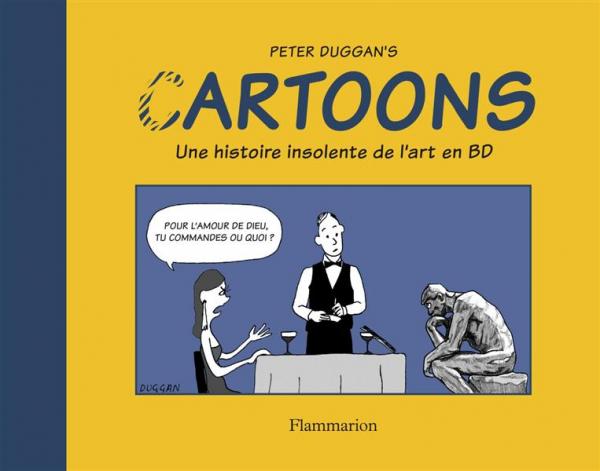 I’m very happy to see that my book has just been published in France by Flammarion. It’s a larger format than the english version. All the better for it I reckon.

You can buy it here: 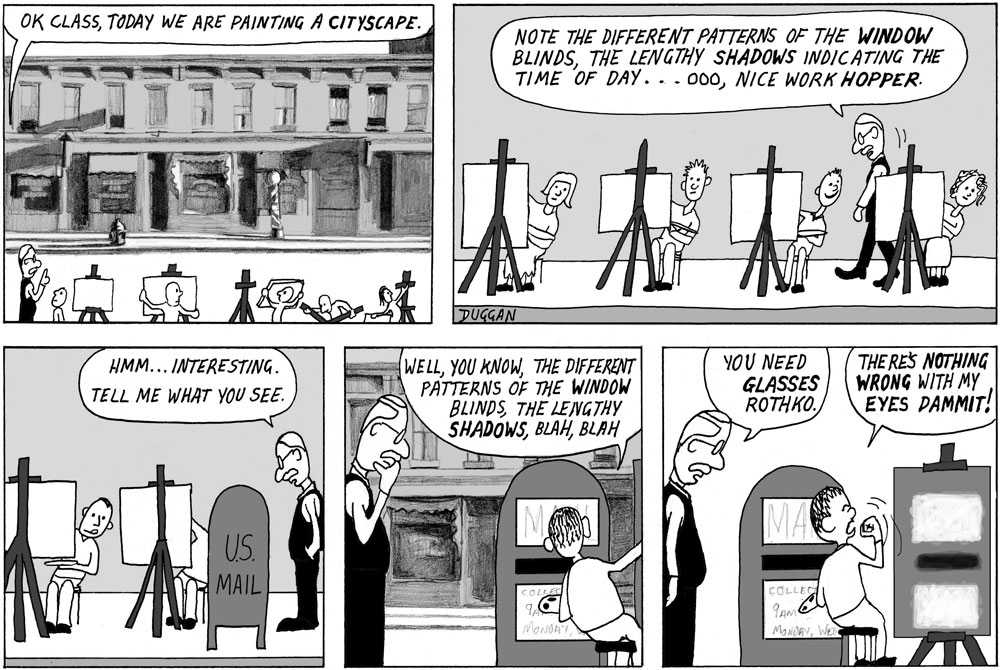 Looking for the perfect stocking filler?  Something funny and interesting for Christmas morning? Something that might inspire a life-long love affair for humanity’s greatest cultural achievements? Well that’s a very tall order, so set your bar a bit lower and buy my new book, Peter Duggan’s Artoons. 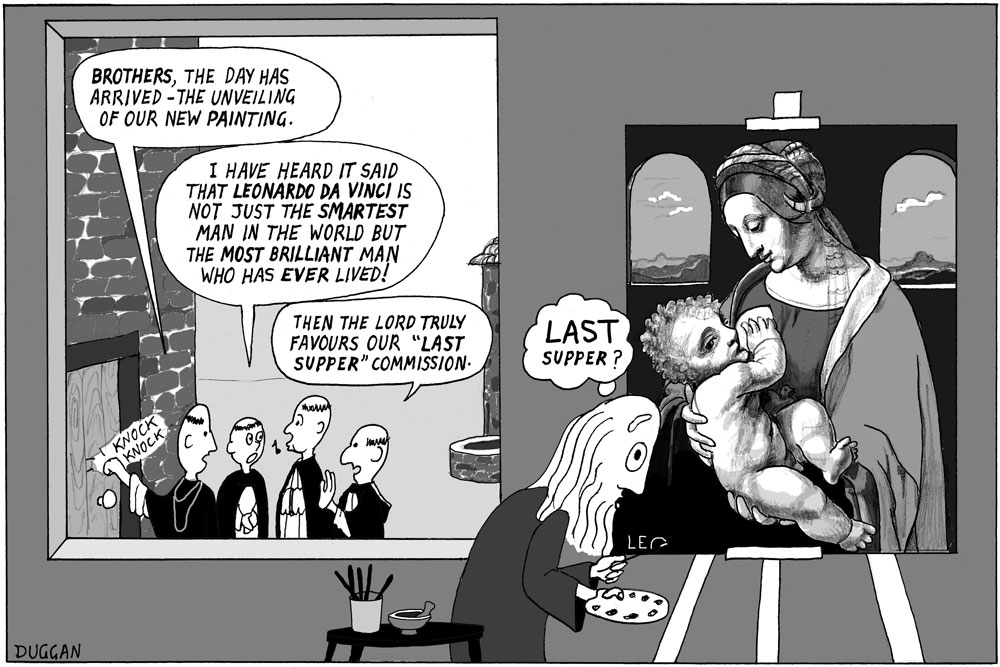 If you think this is dopey you’ll love my new book, Peter Duggan’s Artoons. 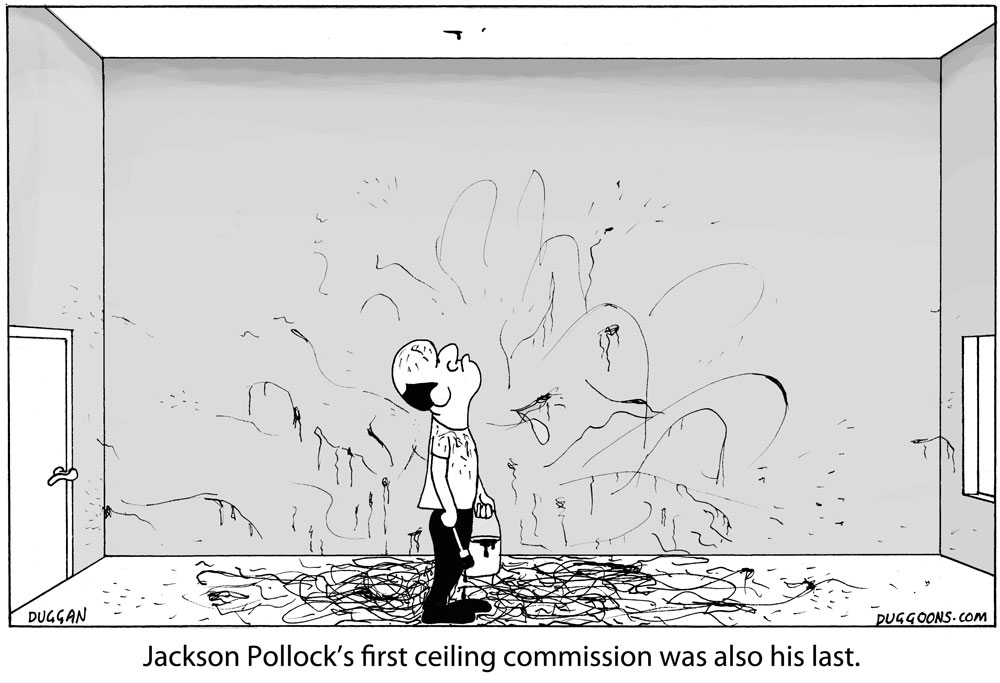 It wasn’t really Pollock’s thing, but if you like throwing up you’ll love my new book, Peter Duggan’s Artoons.