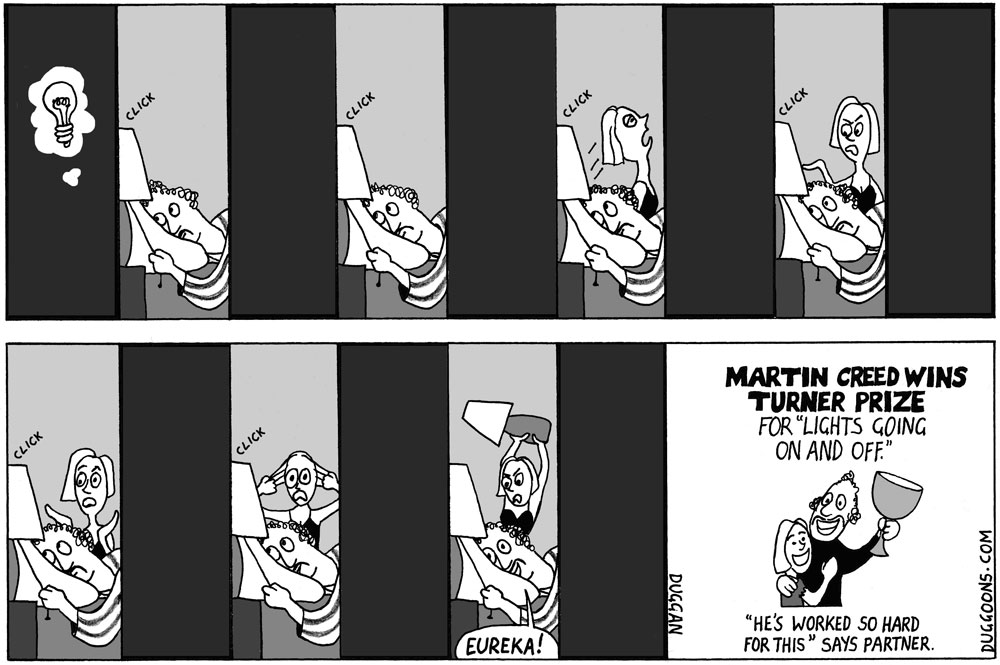 First published in The Guardian, 5 February, 2014

Work No. 227: The lights going on and off , by Martin Creed, is exactly what the title says – a light in a ceiling in a room, switching on and off at 5 second intervals. That’s it.  It has been described as the first important artwork of the 21st century. Other well known works by Creed are Work No. 850, which saw athletes sprinting through the halls of Tate Britain; and Work No. 1197, where people across England rang bells for 3 minutes at the same time. The Culture Secretary Jeremy Hunt took part – his bell broke halfway through. For all you budding art students, this is an example of symbolism.
My cartoon looks like the simplest thing in the world to think up and draw but was actually a bit of a struggle. It was done in the midst of some fluey virus that had knocked me flat for 10 days. The only thing for which I could summon any energy was wallowing, which I did in sweaty puddles of self pity. I am sure in normal circumstances I could and would have done a bit more with it, particularly the ending. Perhaps Martin Creed suffered just as much in creating such an apparently simple looking artwork. Perhaps he too was left feeling like he could have done more with it. He probably walks around slapping his forehead every time it enters his head: “The light should have changed every FOUR seconds. I’m such an IDIOT!!” Anyway he can’t feel too bad as the thing won him the Turner Prize in 2001. For those who don’t know, the Turner Prize is the UK’s most prestigious art competition. For some reason Creed’s winning work prompted quite a bit of discussion as to the merit of contemporary art. I have mixed feelings about it. When the light is on I feel enlightened and when it’s off I get a bit sad. I saw his recent retrospective at the Hayward. It left me ambivalent about his work as a whole but he did manage to produce some strange sensations. His piece  ‘Work No. 200: Half the air in a given space’  is a large room half full of white balloons, reaching above head height. You walk through it, pushing a path through the balloons. I had taken my 5 year old daughter and the accumulating static electricity was giving her hair a maniacal life of its own. In her sheer delight this cackling, wild-haired being burrowed faster and faster through the balloons as I desperately tried to keep up. At that moment I experienced a fear which I think even Freud had overlooked – the fear of losing one’s child in a room full of balloons. Since this was my discovery I got to name it – Duggbloons syndrome.  After an exhaustive peer review process, the scientific journal “Nature”  is on the verge of publishing my paper on the syndrome. There’s just one stumbling block; they demand I credit Martin Creed, at the very least in the footnotes. I am extremely reluctant to do so, for reasons I find  hard to analyse. And why should I? I’m not a £%*& psychologist.

2 thoughts on “A light yet bulbous moment”